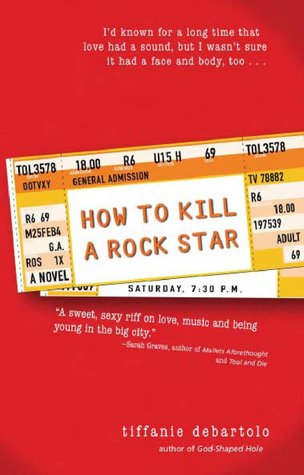 Tiffanie DeBartolo’s How to Kill a Rock Star is about Eliza, a music journalist, whose passion in music matches Paul, the front man of Bananafish. Together, sparks fly and everything seems right. However, every love story has bumps on the road and here it is Paul’s stand against commercializing music. He loves being able to write songs he loves and doesn’t want any big label to dictate his passion. Although Eliza knows and understands this, she has a sacrifice to make for the sake of the band and for them to reach their dreams.

This is the only book I’m really reluctant to share because I want people who read this to appreciate its beauty.

A few of you might know I am not into mainstream music. Not that I’m saying they’re bad, but they usually lack the emotion and message we all want to hear from a song. Sure, they sound nice and the tunes are catchy but that’s it.

That was one of the things that made me relate to Paul. He was passionate about music that he really pours everything into it. He doesn’t care about the fame or money he can profit from it; he just wants to make good music. On Eliza’s part, it’s her view about music being a savior. I consider music as a commodity I can’t live without. For me, music is a catharsis.

Both characters were far from perfect. They have epic flaws that made it hard for their relationship to grow at one point but those flaws also made them more real.

“Like a benevolent god, a good song will never let you down.”