I have a confession to make: The first time I found Fast Food Fiction: Short Stories to Go at a library years ago, I thought it was a collection of stories set in fast food chains. Please don’t judge me (even if I judged the title).

Later, when I read it, I found it to be made up of, as it says on the title, short stories… written by Filipino writers. A world’s difference from the English novels I usually read, here were stories that ended even before they really began. 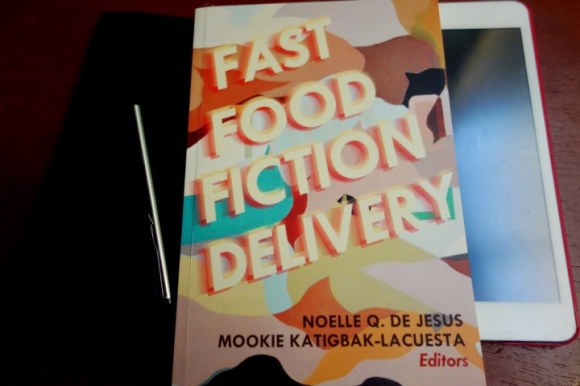 “Reading habits may have changed a great deal. But people still tell each other stories the same way they always have. It remains one of the most universal and human of endeavors. We sense the conflict, steel ourselves for the climax, and marvel at the denouement and resolution. Without even knowing it, we yearn for the enchantment; we long to read a tale that turns on a curve or halts at a twist, at once, a surprise, a mystery and a truth. We all still love a good story. Regardless of the genre, in this quick deft form, there resides magic…This is what sixty-eight writers have done here, whether by happenstance or by sheer, dogged craft.” / Read reviews: Goodreads

Here are my favorite ones:

1. Cold by Lilledeshan Bose—a 442-word story about longing for a dead boy

“Of course, I think about Andy a lot, and not just because I am alone, lonesome and lonely.”

2. Polo by Astrid Fontanilla—One of the exceptions to the rule with a 503-word count, this story says it all with its first sentence:

“When Erning learned that his entire monthly salary of PHP5,619 was just the price of one of his boss’s shirts, he decided to buy one.”

3. Shouldn’t It Be Funny? by Marc Gaba—a 489-word story about a couple who doesn’t know what to do with the elephant they recently bought

“’I wouldn’t ever get an elephant,’ said the friend I asked. ‘I mean, why on earth?’

‘But if you had one, what would you do?’

“No, Ma’am, I don’t despise any of you, but I thought this was a Fine Arts course, a course where you learn to make things, not to learn how to write like, well, Foucault or Derrida or those people.”

An anthology of stories about Filipinos, written by Filipinos for Filipinos. Forget your diet and gobble this one up. ☁