Let it be known that World War II is one of the most depressing periods of history, at least in my opinion. So when I started reading The Eye of the Storm, I was already expecting to feel all the feels. Star-crossed lovers? Check. War? Check. Senseless deaths? Check to the positive infinity. 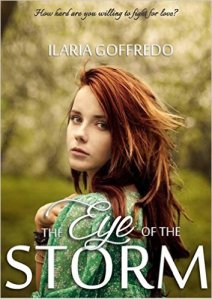 The Eye of the Storm by Ilaria Goffredo is a historical fiction set in Italy during World War II. The story is told from the perspective of Elisabetta “Elisa” Greco, a teenager from the town of Martina Franca, who narrates her family’s experiences under the fascist rule.

During this turbulent period in history, Elisa is also busy growing up. She starts out as a plain, obedient girl but later on learns about the cruelty of the fascist regime, becomes acquainted with rebels who want to liberate the country, and falls in love with the impossibly charming Alec.

Some scenes in the book have explicit violence and sex. I would recommend this book to mature readers.

This is a typical young adult love and coming-of-age story, only it’s set during a dark period in history. Some people may shy away from books branded as historical fiction but The Eye of the Storm is relatable enough because of the young characters who find love for the first time—a universal and timeless theme.

It has just the right amount of cheesy lines, cinematic escapes, heroic feats and historical trivia to make it an enjoyable and exhilarating read. Given the world’s current fascination with period films, it would be fun to see this story on the big screen.

As a protagonist, Elisa is not likable at first. What’s so special about her? Then you gradually fall in love with her. And after everything she has experienced, you just wish with all your heart that she survives because she deserves it.

The story is also well-researched in terms of the social history under fascist rule. The details about the day-to-day lives of people or how the work/death camps operate make it feel very real.

I also appreciate the fact that Goffredo set the story in Martina Franca, her hometown. You can feel that this story is very personal and that this is her way of paying tribute to the people who fought against the fascists during the war. I may be biased because I am a history enthusiast but I believe that this is the type of story that should always be told for generations to come.

Does this story have a feminist undertone? If it has, I would say it wasn’t obvious. It’s a story about a girl living in a man’s world – and during war! What do you expect? It tries to stay real by portraying men in all their glory and power. (Spoiler alert! Highlight succeeding text to read.) Despite this, Elisa has her moments of strength, like going after her brother Antonio when nobody else in the rebel camp would, and speaking out of turn for concern of her friends in the work/death camp.

The story is told from the perspective of Elisa and it remains faithful to this except for parts where another character is saying something in English. The dialogue of that character is suddenly translated but Elisa doesn’t know English, even in a conversational level. It would be better if the author didn’t put the direct translation of the English dialogue. If you can’t understand a foreign language, you wouldn’t catch entire sentences being said, would you?

(Spoiler alert! Highlight succeeding text to read.) There is also a part there where a lieutenant escaping through the woods lights a bonfire to keep him and Elisa warm for the night. A lieutenant would know more than anyone that lighting a bonfire is a surefire way for their enemies to know where they are, especially if they’re hiding.

I would expect the family of the fiancé of a high-ranking official in the fascist government to be treated better than normal civilians. Having more rations or better living accommodations, for example.

Expect to be thoroughly depressed but still kind of hopeful. Despite being at war which the book has likened to a “storm,” it reminds us that the eye or calm can exist and that we can find it in moments of friendship and in people we love. ☁

Bookbed received an ebook from the author in exchange for an honest review. Read our Review Policy here.

One reply on “Bookbed reviews: ‘The Eye of the Storm’ by Ilaria Goffredo”

The Bookbed’s review for The Eye of the Storm.