Bookbed reviews: ‘The Multiverse of Max Tovey’ by Alastair Swinnerton 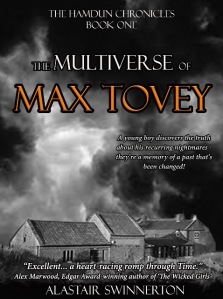 Fourteen-year-old Max Tovey’s world is blown apart when he discovers that his problems are nothing to do with him, and everything to do with being a Time Traveller. Following his mysterious grandfather’s funeral, Max finds himself on a wild journey through first century Celtic Britain, real and mythological, as his every action threatens to change the past, and his future.

Max battles demons – both real and psychological – on his mission to find the legendary Montacute Cross, stolen by his Viking ancestor Tofig, in order to close the gates to the Underworld, and lift the curse on his family.  Read reviews: Goodreads

“Max felt strange, a growing sense of empowerment welling up inside. Max had never felt empowered in his life, except when playing video games.”

Even though I couldn’t entirely relate to Max’s view, I admired the way the book depicted the epitome of teenage crisis, which centers mostly on insecurity and uncertainty—emotions I could empathize with.

Also, I liked how the book was not solely focused on the action but also showed his discovery of his self, both as a 14-year-old and as a Time Traveler, through the adventures he took.

“Really?” said Max, a little confused. “So, how am I going to help you then? Traveling is sort of what I do.”

My favorite of all was the character of Myvi, whose sarcasm and light romance with Max kept me from falling into the dark realm of the multiverse in the story.

History and story flow-wise, there was a lot for me to take in. Add to that, the names were hard to recall that I had to go back and forth to remember who was who.

The Multiverse of Max Tovey by Alastair Swinnerton is an exciting must-read for sci-fi-slash-history YA readers. ☁

Bookbed received an ebook from the author in exchange for an honest review. Read our Review Policy here.