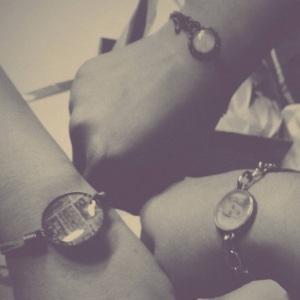 Number one. When he won’t love you back, remember that your father used to hurt himself doing cartwheels because he wanted to make you laugh.

Number two. If he tells you that you SHOULD dye your hair black even when you like it red, ignore him. And remember to do your roots so he never sees your hair black again. However, if he asks nicely, and you are in the mood for raven, go ahead. Indulge him.

Number one. When he treated you badly or betrayed your trust, remember that your father used to hold your hand all the time so you won’t get hurt. Remember that he always had a band-aid when it did hurt.

Number five. You can say no. But don’t say no to punish or to spite. You’d be surprised how many relationships were destroyed by a ‘no’ that has been said with malice.

Number one. If you are unsure about him, remember how your father used to look you in the eyes, full of certainty, that he could never love anyone more than he loved you.

Number seven. If he claims to be a “real man,” don’t believe him. The proof is in the pudding.

Number eight. If he promises to never hurt you, laugh and remind him that Lucifer was once an angel who messed up. He will mess up. He will hurt you. But don’t stay up until 2AM waiting for it to happen so you can point your pitchfork at him and scream ‘I knew it!’ Don’t lock your eyes on his feet hoping his next will be the misstep. Besides, don’t you have better things to do?

Number one. When he messes up, remember that you father lied about the tooth fairy and Santa Claus and the fact that he wanted to divorce your mother because he fell in love with someone else.

Number nine. When you ask and he gives an answer you don’t like, don’t be mad at him and instead, appreciate that he’s being honest. Know that lying is the easier path for those who are afraid to rock the boat. Trust me, it’s better to rock the boat.

Number ten. When he gives you the wrong gift, don’t be mad—even when you’ve spent a month dropping him hints. A relationship is not a detective game where you leave some clues and he figures out the puzzle. If you want something, ask.

Number one. When he forgets you had a reservation for dinner, remember how your father used to forget to show up because he got caught up in work. Remember how you understood why he had to miss your birthday.

Number one. When he starts laying a hand on you, remember that your father was afraid of letting you out into the street because he heard the news about the bad men who took little girls away and molested them.

Number one. When he starts ignoring your calls, remember how your father always asked you to call because he loved hearing from you.

Number one. If you ever start to wonder what to look for in a man, remember how your father loves you. Ask for no less.

Number one. If you grew up not having a father or one who never taught you how a woman must be loved, learn by loving yourself.

Number one. Love yourself. ☁