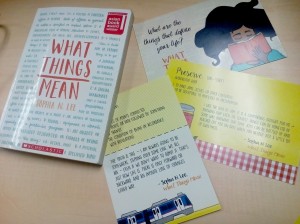 Olive is your typical teenage girl with growing pains. She has weird taste in food, she knows nothing about makeup and she feels she doesn’t belong in her family. This is aggravated by her physical appearance that couldn’t have come any farther from her mom’s and her extended family’s. Olive has dark skin, curly hair that can’t be tamed, and is taller than most girls her age. On top of all these, a dark cloud looms over Olive’s everyday life—she has never met her father and her mother refuses to talk about him. As Olive desperately searches for clues about him, she also searches for the meaning of life in everyday things.

Simply yet beautifully written and highly contemplative. Olive’s epiphanies about life, love, family and human connections are timeless and universal. For the hugot crowd, there’s also a lot of hugot statements that send shock waves to the heart. Cases in point:

“Maybe that’s how it’s meant to be. Maybe we all have to let go of things, and people, in order to keep our balance. Maybe that’s the only way to keep moving forward.”

“I know enough about magic to say that most of it is hinged on illusion, but for some reason, there is a part of me that still believes. I think that’s the thing that most people miss about magic – how it relies on one’s ability to make people believe.”

“This means that no matter how close two things may be, you can always find another point between them. That’s how I feel right now—with everything. Close, but still not close enough.”

I rest my case. You will not run out of quotable quotes in each chapter. 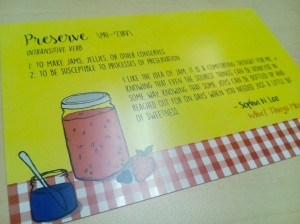 Lee’s style of writing also ties in with the book’s title, what things mean. For every start of a chapter, a word is defined. Lee carefully chose words such as Jar, Jam, Line, Space—words that have multiple meanings. Using Olive’s first-person POV, she then explores the meaning of these words and how it relates to her life.

It’s impossible to think of anything you can’t like with this story.

(Spoiler alert! Highlight succeeding text to read.) However, I wish there was more about Olive’s mother, though. She was a consistent and stubborn character, adamant on never telling Olive the whole of what happened. A more thorough background that Olive could have discovered would have given her more dimensions. So what really happened between her and Olive’s father? The story was open-ended but it would have been interesting to know.

What Things Mean was awarded the Asian Book Award and it rightly deserves so. A tale of a girl who desperately tries to find meaning in things and her place in the world may have been told many times already, but Lee makes it extra poignant and extra sticky so it tugs the heart extra tighter. ☁