As far as I can remember, I’ve always found myself reading books where there is sadness, regret or some form of gloom surrounding the main character.

When I saw the post on the Buhay Movement group about writing about books that have helped me deal with mental health issues—mental health related or not, I jumped at the chance to do it. I’ve always wanted to share how books have helped me throughout my life but I’ve almost always felt that people might judge me because I might be crazy or sick in the head.

But when one has been diagnosed with mental illness, one is literally sick in the head.

So I scoured my bookshelf and my e-books folder to search for stories that have left even a small impact on my mental health and my daily life. I made an extensive list at first, but then realized that I only needed the most important ones to get my message across. 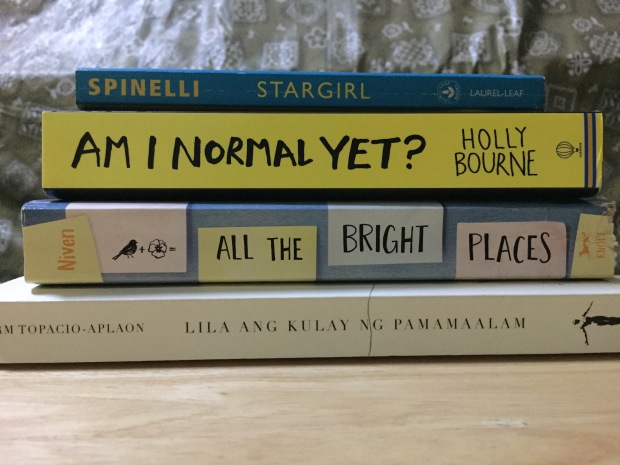 The name that I use online, NOTSTARGIRL, is taken from Stargirl.

The first time I read this book was in high school, which I borrowed from our school library. I also read the sequel, which has a lighter story than this one.

The story doesn’t have anything largely to do with mental health or having mental issues, but I related to Stargirl. She was a quirky character who had her own identity. At some point in the story, she tried to fit in, which is something everyone tries to do, but she eventually went back to being herself. Stargirl taught me that it is okay to be different.

2. All The Bright Places by Jennifer Niven

I read this book without knowing what it was. I just jumped on the bandwagon and wanted to see what the fuss was all about.

I found that this book reminded me how sometimes, one’s demons are greater than the person, and that they can eat you alive.

One of the characters, Finch, wrote quotes on pieces of paper that stuck with him and hanged them up on his bedroom wall. I also did something like that: I wrote on my wrist a word I wanted to embody for that day.

3. Am I Normal Yet? By Holly Bourne

This book is very dear to my heart as it tackles anxiety disorder. I have been diagnosed with General Anxiety Disorder, also known as GAD, and Evie, the main character of the story, also has something similar, plus Obsessive-Compulsive Disorder or OCD.

Coming to terms with having mental illness was not that hard for me as I’ve always known since high school that something was different about me. For example, I would be worrying irrationally about something that was not worth it.

Like Evie in this book, I wanted to hide the fact I had a mental illness. I was afraid to know how they would react. But then, like Evie, too, I slowly opened up. It turned out that my friends understood, or at least tried to understand. Having that support while understanding my own self was—is—comforting.

Lila is the only book written by a Filipino author in this list because there aren’t much that tackle mental illness, breakdowns or suicide that I know of.

When Lila committed suicide, Dylan tried to live his life without her. While he had girlfriends, he couldn’t seem to commit. And because he couldn’t get over Lila, he eventually had a breakdown and didn’t move for days, drenched in his pee and whatnot.

In the three years that I have lived with GAD and depression, I have let dark emotions get to me and even convinced my self I was on the way to giving up and just taking my life. (I never attempted it but I did contemplate it.) This book has shown me it is possible to live letting the feeling of constant sadness eat you inside without swallowing you whole.

This book is about Sam, a girl who has Pure Obsessional OCD. She coped by finding a group of poets in school in a hidden room, outside her group of toxic friends, and talking to a therapist.

I related to this story because I also took to writing what I couldn’t say out loud. During my “super depressive” stage, Sam was my form of catharsis. My writing exercises allowed me to express whatever it was I wanted to say without anybody judging me for my thoughts.

Other books I loved and found helpful include: Looking for Alaska by John Green, Falling into Place by Amy Zhang, Thirteen Reasons Why by Jay Asher, My Heart and Other Black Holes by Jasmine Warga, Norwegian Wood by Haruki Murakami and The Marriage Plot by Jeffrey Eugenides.

Having a mental illness can make you feel incompetent and paralyzed in your own body and mind. Having strongly negative thoughts may compel you to do things that aren’t you, and will never be you. But having support systems in people and books definitely eases the feeling of pain and being alone. ☁