Where A ‘Promdi Heart’ Goes (Part 2): An Interview with Chris Mariano and Agay Llanera 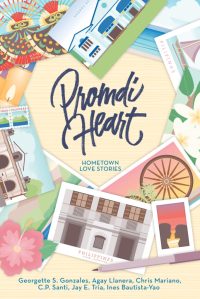 Preparing your to-read pile for the next month? You might want to add Promdi Heart, a romance anthology set in different Philippine provinces that is sure to take you on adventures! (Also good for #BookbedReadsPHLit!)

In this interview, we talk to two of the authors, Chris Mariano and Agay Llanera, about summer festivals, fishermen’s abs and how to write about love! (Read Parts 1 and 3 here.)

Hi, Chris! I love that Drummer Boy’s central setting is in Kalibo, Aklan during the famous Ati-Atihan festival, and that it is about the titular character! What inspired you to write this story?

Ati-Atihan is one of my favorite times of the year, and it’s always filled with very colorful characters.

Ben isn’t exactly loud and attention-getting, but he’s a drummer, and Ati-Atihan wouldn’t be complete without someone like him! There are many of them during the week-long festival that I’ve wondered what kind of lives they live during the other 364 weeks of the year. Do they do this full-time? Do they have other dreams? Ben was born out of those musings, and I thought his age (just a couple of years out of college) made him the perfect character to deal with the conflict I wanted to explore.

One of the things I like in this story is the vivid descriptions of the festival scenes, and it made me wonder if, by any chance, you’ve taken part in the Ati-Atihan festival. If so, could you share with us your experience?

Ati-Atihan happens every third Sunday of January, and my year doesn’t official begin until after Ati-Atihan! Family members come home, friends fly over—it’s like one huge reunion. It’s considered a religious festival in honor of the Sto. Niño, so there are masses and processions. There’s a Don procession every third Saturday, a huge mass held outside the church on the morning of the third Sunday, and the grand procession later that afternoon. Groups take to the streets with their drums and lyres and decked in a range of costumes. Anyone can trail after the groups, dancing and chanting, “Viva kay Señor Sto. Niño!” I’ve attended the festival nearly every year since my junior year in college; I think I’ve only missed one year!

There are so many kilig moments in this story, and I want to know: Which particular scene did you have fun writing?

I am glad you found the scenes nakakakilig! I had fun writing about their inuman session, because I got to explore their dynamic together and with Reina’s brother. Plus the last scene, just because. I think the whole story was really born out of that last scene.

Did the anthology’s theme of crafting stories set in a specific province in the country provide any challenges for you? If so, what were they and how did you overcome it?

I wasn’t particularly intimated by the thought of writing something set in the province, because that’s always something I’ve wanted to write.

What I found challenging I think was trying to tell their story using such a short medium. I was so dissatisfied with how I was writing it, and the first draft that I felt comfortable showing to other people turned out to be so compressed. It took great comments from my fellow writers for me to nudge the story in the direction I wanted it to go.

Hi, Agay! Back to the Stars is centered on Leah coming back to one of her childhood haunts in Pandaquit, Zambales after 10 years in Manila with a couple of her colleagues at work. Have you ever been in a similar situation wherein you took friends from the city to your hometown? If so, what high jinks are you willing to share with us? 🙂

I’m sorry to say that I haven’t done this! But my husband and I (and now with our kids) often go to Pundaquit. He’s a cool guy and doesn’t mind when I ogle fishermen. Theirs is a very physically demanding job since they have to lift the boats so these could dock on the shore or get into the water. My husband joins me in “fisherman-watching” and say things like, “Wow, look at the abs on that dude!” or “I’d like to have that kind of bod!”

There was a particular scene in the story that showed how much Manila (or the city) could change a person that originally came from the province. What pieces of advice would you like to impart to promdis about to start a life in the metro?

I was born in raised in Manila, but I’d like to think I’m [a] promdi at heart. In fact, I’d like to retire in the province—or if possible, live there, now na! But I have a lot of promdi friends and I appreciate the ones proud of their heritage.

If you’re a promdi who’s going to be stationed in Manila, don’t forget who you are. Go home often to remind yourself who you were—an important part of becoming who you want to be. (Wow, that made my head spin, but you get my point.)

In the story, Leah has some opinions regarding the famed Parisian dessert, macarons. Are your opinions aligned with your main character, or is it totally different?

I like macarons! But I’m such a cheapskate so I’m not the type to shell out a hundred bucks for a piece. I’ve tasted the Laduree ones. The flavor is so subtle that, to me, this doesn’t matter as much as its texture—crisp and smooth on the outside and creamy at the center, yet so light that it feels like I’m biting into a cloud. Winner!

“Biting into a cloud”—well, we like the sound of that! *wink* Speaking of winners, can you share with us your favorite moments in Back to the Stars?

My favorite is when they all went to Anawangin where they had a picnic. This is where a crucial romantic point comes in—and yup, it involves crab.

Did the anthology’s theme of crafting stories set in a specific province in the country provide any challenges for you?

Not really. I found that writing about the province had the same effect as visiting it. It was a breath of fresh air!

If you had to pick another Philippine province to be born to, where would it be and why?

Agay: I’ve always loved Davao—another province that played an important role in my childhood. My lola used to live there, and through the years, I’ve seen how Davao City developed. I love how both the mountains and beach are just minutes away from the city.

What would be good books to bring along for vacation?

Chris: The books I’d bring with me on any vacation would really depend on my mood. Some solid reads would be Hiromi Kawakami’s The Nakano Thrift Shop, Ana Tejano’s Keep the Faith, Camilla Monk’s Spotless series and Maggie Stiefvater’s The Scorpio Races.

Agay: Books that have lovely, lovely words that inspire you to look at life in a different perspective. Right now, I’m reading a book I borrowed from Ines (who also has a story in the anthology) entitled The Day I Ate Whatever I Wanted by Elizabeth Berg. It’s composed of short stories that speak of indulgence, and the author’s words are just so beautiful that I have to pause several times while reading to just soak them all in.

What was your most memorable experience in the province?

Chris: Each Ati-Atihan brings its own share of memories that my friends and I have agreed that ‘what happens at Ati-Atihan, stays at Ati-Atihan.’ But my best memories of the province would be the summers I spent with my sisters there. We spent a lot of those days playing inside our room, and we’d play things like hide and seek or pretend. One time, we even took the discarded cardboard box for an electric fan and turned it into a time machine!

Agay: I love food tripping in any province I’m in. It’s nice to discover something delicious in a hole-in-the-wall restaurant and share the experience with friends.

Chris: Don’t be afraid to look for the ‘why’ behind each scene that you write. I think that each scene should be purposeful, whether its intent is to deepen the character or to advance the plot or foreshadow something. I think that’s particularly helpful when you’re writing a short story, because you have such a limited space to explore everything.

Any good old piece of advice about love?

Chris: I think that if you’re with someone who makes you want to be/feel like you’re the best version of yourself, then you’ve got it made.

Agay: It’s true what they say about finding someone whom you can imagine cultivating a long friendship with. The razzle-dazzle will fade but the friendship is the one true thing that will bind you. After all, true friends don’t turn their backs on each other. ☁