Ah, Instagram. A source of joy, a source of envy, sometimes the source of your broken phone because you threw it halfway across the room in a fit of bitterness. In my case, it was the source of landing a job most bookworms would find cool: Getting to be the voice actor for young adult novels.

In 2015, I was scrolling, as you do, through my feed when I spotted Mina V. Esguerra’s post about rehearsals for FilReaderCon. The bookworm, as well as the (unemployed) actor in me jumped up and thought, “Rehearsals? Reading? I must know more!” I dusted off my Instagram stalking hat (yes, all girls are given them at birth) and quickly found out about the live readings. I quickly messaged Mina, offering to be of help, because you know, I liked books, and as I previously mentioned, I was unemployed. She replied back saying they’d already recorded the first season of podcasts, but she’d let me know if anything else came up. 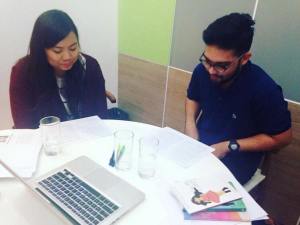 It wasn’t until a few months later that Mina approached me and said, “We’re doing a YA version of the #romanceclass podcasts. Would you be interested in coming in and recording for us?” YES, I WOULD. They found another actor, Herv Alvarez, to be the other half of the podcasts, and we recorded our lines in one afternoon.

Then, Mina told us about the live readings. They were holding an event called #AprilFeelsDay, and would we be interested in participating? And the rest is history. 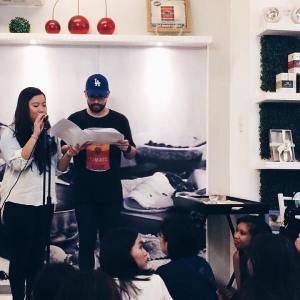 If you’ve ever been to a #romanceclass live reading, you’ll know that it’s madness, and in a completely delightful, wondrous way. The audience is always so engaged and energetic that I almost forget about stage fright—their mood is too contagious!

Before then, I hadn’t met many Filipino authors, and to see them all under one roof, dedicating themselves to expanding the Filipino indie publishing scene, was nothing short of amazing. It’s something my fellow actors and I marvel at whenever we had rehearsals for a live event: #romanceclass was the epitome of creating opportunity for yourself and future Filipino authors. The community had created an opportunity for me too, not only as a performer, but as a book vlogger. Mina had subsequently invited me to more of their events, where I got to meet many from the world of Filipino authors and publishers (and once, Atom Araullo. But, that’s really beside the point!).

The more and more events #romanceclass had (for example, #FeelsRushIn, which I was a part of, too), the more popular they got, until fellow book bloggers caught wind of it and started making their way to events. At that point, I had left for the States to pursue a degree in theatre arts, but thanks to social media, I was kept in the loop regarding all things #romanceclass.

And so the tale that started off on Instagram, ended (for now!) on it as well, only this time I’m more of a happy spectator. But who knows? Maybe someday in the near future I’ll be able to open my mouth and once again, have the words of a Filipina YA heroine come out of it. When that day comes, I hope to see you in the audience! ☁