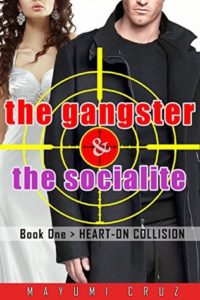 Marie Megan Montecillo’s glamorous, sheltered, peaceful life was shattered and turned upside down by a series of staggering events which took her in a dizzying, whirling, roller coaster ride of unbelievable proportions.

Will she survive with her life and wealth… and heart intact?

In this romantic comedy story with a crime/suspense twist, get ready to be plunged into a whirlwind of volatile emotions and non-stop action as two people from very different worlds collide, resulting in a spontaneous combustion that neither of them planned nor imagined.

A beautiful, delightful love story borne out of a tragic serendipity that will flutter your heart and excite you with suspenseful twists as fast-paced action interlope with romantic encounters when a pretty, wealthy socialite meets a handsome, shady character who’s definitely out of her league.Get a copy: Amazon, Bookbed Store (print) / Read reviews:Goodreads

Richard and Megan’s relationship was one of the most cliché plots in any love stories: a love-hate relationship. But I’m trash for that trope. Their cat-and-dog relationship helped build the comedic scenes of this action-romance story.

Aside from the main characters, there were secondary leads that readers will really like. For some unknown reason, I was attached to Jerald’s character. He was one of Richard’s gang men and all throughout the story, I prayed that he wouldn’t die. (Spoiler alert! Highlight succeeding text to read.) He almost did! But he survived, thank you, universe!

As mentioned earlier, Richard and Megan’s relationship is of a love-hate one. I think the story could have explored the full potential of that part of their relationship more. The two characters fell in love with each other too fast amidst the love-hate relationship they had. I understand the attraction but everything else felt too fast-paced.

In addition to that, the romantic scenes happened in the most unromantic scenarios. It killed all the kilig moments.

Their first kiss happened when Megan was sobbing because Richard pushed an old blind man so hard that the old man fell on the sand. They argued then all of a sudden Richard thought a crying Megan was too attractive that he had to kiss her. Not the appropriate moment to have the characters’ first kiss, right?

There were also too many plot twists and too much drama for a 111-page book. I could submit Grandpa Ted’s life story to MMK along with Vincent’s, Megan’s father. The only plot twist I enjoyed was when it was revealed that Frederick was Richard’s father.

There were some dialogues that I wished were written in Filipino for a stronger impact, especially Megan’s lines when she argued with Richard.

For those readers looking for a romantic story with some action, suspense and many plot twists, The Gangster and the Socialite by Mayumi Cruz is the perfect book. ☁