With mentions of failure, bullying and suicide (not to mention, a great pretender~) on the blurb, readers might think twice adding Ghost of a Feeling to their reading list. I know I did. Because if you’ve experienced these things yourself, it’s a little scary to be going into a story that could possibly mess with your head big-time.

This book did get to my head—and to my heart. 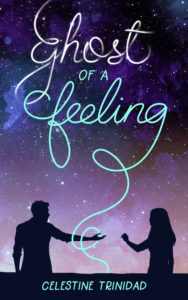 All Cris Villareal had ever dreamed of was becoming a doctor. But after the death of a patient under her care and the subsequent humiliation she suffers under a senior resident in her hospital, she begins to lose faith in herself. And no one else could understand her and her despair.

So one Halloween night, up on the rooftop of her apartment building, she decides to end it all.

She is stopped from jumping by Emilio, the ghost of a young man who haunts her building, who also committed suicide there many years ago. Eventually, Cris finds herself opening up to him, in a way she had never before, with anyone living or dead.

There is only one problem.

He is actually a living young man named Nathan Morales, and Cris was just one of the unwitting victims in a prank he had once played on the tenants of her apartment. But being Emilio was the only way he could think of to stop her that night, and the only way now he could get her to open up to him. As Emilio, he was someone she could trust enough to help her, in a way Nathan himself never could.

As their relationship grows deeper and their feelings grow stronger each day, can he finally help her find a reason to keep living?

But how long can he keep lying to her? Get a copy: Amazon / Read reviews: Goodreads

I can’t think of anything of similar themes I’ve read before that compares to how well plotted and perfectly paced this book is. There’s no unnecessary scene or character, and every feeling has a reason for existing on the page. The quips and the emotional pulls are rooted in things that people can relate to with ease. The character development is strong and the storytelling smooth, making it hard to put down.

Cris is someone I feel for. Having failed at many things so many times before (and in the future, too), it is easy to understand her despair and confusion. Especially when situated in a society like ours here in the Philippines, where failure, of interpretations of it, remains a harrowing experience—looked down, shunned, gossiped about, pitied. Sometimes even, family, friends and other people who matter become the very ones that make someone vulnerable and insecure, like Cris, shrivel more.

“So you’re really lucky to have this opportunity. So don’t waste it. And besides, if you quit, what are you going to do, then?”

“You can’t quit because there’s trouble up ahead. I didn’t raise you to be a quitter. You’re stronger than this.”

In turn, strangers can be a godsend. And for Cris, this is Nathan, in the form of their building ghost Emilio, who talks her out of putting an end to her life.

“I cannot guarantee that things will get better later, because sometimes, they really don’t, at least not for a long time. Things might get even get worse from here, and you may never be as happy as you hope. But I am sure of one thing: If you do decide to end it now, there really will be no chance of you ever being happy again.”

While I had my qualms about his pretension at first (plus the fact that he was getting over someone), he proved me wrong. It turned out he has genuine intentions befriending (and eventually, romancing~) Cris. And with all his efforts, investment and that sense of humor, rooting for the #mumuLI was inevitable. Their moments together are also so heart-warming, casual conversations or philosophical exchanges.

He may not have guaranteed happiness, but he sure brought it, anyway, along with hope.

“Think of those fireworks instead, and the wonder you felt when you looked up at them, and the hope. Because there is wonder in the world still, and people deserve to experience it, always. Especially you.”

On bullying in the workplace, I’m [mixed feelings] to have found facets of my experiences in Cris’s, with her relationship with a senior at the hospital. I’ve been on both sides of this terrible behavior that happens everywhere and to anybody, and I think I can say how much this plays a huge impact on a person’s mental and emotional health. The author portrays this quite accurately, leaving me, as I’ve said, [mixed feelings].

Last but the most special: attempts of suicide, coupled with mental health. For those who deal with anxiety and the fear of dying like me, to come across a book like this is difficult. I don’t want to go on and try to discuss in-depth about something I myself don’t fully understand yet, but as far as the story goes, the author treats these themes with so much care.

Ghost of a Feeling by Celestine Trinidad will haunt you in good ways. This story about losing hope and finding it again will stay with you after you’ve finished and even when you’re already on your next read. Recommended to any reader who has ever felt lost and lonely, any reader who needs that push to power through again, which means to say every reader. *puts this on my maybe-forever reads list* ☁

The reviewer signed up for an ARC through the author. The digital edition is now available on Amazon.

3 thoughts on “Bookbed reviews: ‘Ghost of a Feeling’ by Celestine Trinidad”