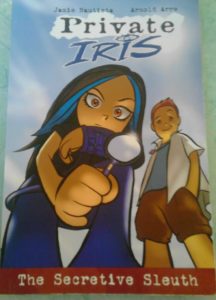 Danton Cord is one of the most popular boys in MacGuffin Elementary. His friend, Iris Able, is a loner whom people think is weird. Because she doesn’t talk to anybody, the kids in school have given her the nickname “Private Iris”. However, Iris is also the smartest and most observant person in town. When the money of a class’ cashbox is stolen, Danton sees this as a chance to make people see how special Iris really is. If he can convince her to solve the crime and get the class its money back, maybe he can get Iris to be a bit more popular. But will Iris be willing to help out people she doesn’t like? Read reviews: Goodreads

Physically: The format is handy compared to the big single issue comics it was initially published as.

Story-wise: Private Iris provides solid content and character development in every chapter is great, especially with Iris. Though the story is geared to teach kids to save money, it is obvious as you go along with the book that the story doesn’t suffer for the sake of advocacy.

Art: When Arnold Arre is mentioned, the art in Mythology Class, or After Eden, immediately comes to mind. However, Private Iris demands a more cartoony rendering, which is none the less good.

It would be nice if the names of the characters were more Pinoy-sounding. The language and the setting of the place already feel American.

Even though it is almost a decade old, Private Iris still holds its own and offers the right stuff for kids who want to read a detective story. Reprinting this in a handier format is also a good move that might make it more accessible to kids and adults alike. ☁