by Racquel Sarah A. Castro 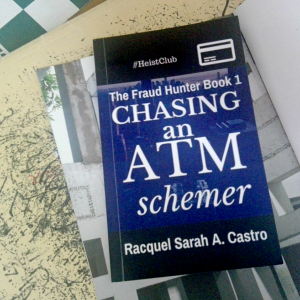 Conceptualizing a crime fiction story was a challenge for me because at the core of my writing objective is the aspiration to make people feel good about who they are. Therefore, I wrote romance and inspirational pieces. So, really, shifting genres to mystery or thriller never crossed my mind. I could not write about dark souls and examine their plights to further my writing career.

And then Mina V. Esguerra published a call for a new online class: #HeistClub. And I found myself a part of the first crime fiction class organized by the #romanceclass guru. The reasons behind the compelling need to try out this genre was an abstract idea in the beginning. But every lesson we received from our mentors helped me realize that my core writing objective could also be applied here.

Our #HeistClub mentors encouraged us to open our hearts and minds to the need to write about crime. I connected this with the popular saying, “An ounce of prevention is better than a pound of cure.”

I must say that when we speak of our country’s current state on crimes being committed by and against Filipinos, the likelihood for even minors to be victims or commit crimes themselves are immense as they get exposed to a very cruel world. The situations they find themselves in put them in survival mode, even to the point of criminality.

Because I love experiments and dares, I tried to come up with a story that didn’t have to be about murderers. I chose theft and researched its different types. I read Smaller and Smaller Circles twice (the first time because it was among our reading assignments) to be able to convincingly write a seemingly vicious villain but who, somehow, also had a heart. I made her vulnerable in love and family because I needed to point out that criminality was not in her character. It was just because of making the wrong choices and keeping the wrong company.

They say, “Life is a choice.” My characters always have a choice: To live happy or to breathe misery and pain. I listen to their voices coming out of my conscious mind. Most of them shout justice for their desolation and despair. Some are kind-hearted by nature, but succumb to committing crimes because of prejudices in the world they move in.

As an Information Technologist myself, part of what I studied was to innovate sets of information to a system that will benefit mankind. It should be that way. But technology, nowadays, had been misused to the extreme. The cyber perpetrator of my story found ways to steal information and even identities.

I have friends who have been victims themselves of identity theft. As I wrote Chasing an ATM Schemer, media reports had been rife with ATM Scheming. I said to myself, “If they only knew how to avoid that, they would not be victims.”

These prompted me to push for an advocacy on cybercrime prevention. I decided that in my books, I would be using true stories from the victims of different cybercrimes, as the perpetrators wait for a willing prey to believe their propaganda and deception.

Everyone can be a Gabe Jacinto; serving the people with dignity and truth. The Fraud Hunter 1 is a book that I can be proud of because it became a book about my social responsibility to inform the public about the reality of cyber predators just waiting to take advantage of the vulnerability we all have.

I choose to use my capacities as an author to seriously take on this responsibility. We all have a duty to make this world a better habitation to live in. I encourage you to find your platform and do the same. ☁