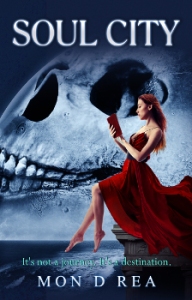 IT’S NOT A JOURNEY. IT’S A DESTINATION.

When Nate Cuervo dies in a diving accident, he realizes he isn’t ready to leave everything behind, including his girlfriend and soulmate Samantha. He falls into an underworld prison where the only way out is through an eccentric reaper named Sephtimus Rex. As head reaper, Septhimus leads an army of supernatural Crows tasked with the cold deportation of overstaying spirits from the human realm.

But the fates smile on Nate because the head reaper has problems of his own. He has fallen in love with a mortal girl; an abhorrent sign of weakness that, if discovered by the Crows, will start a power struggle in hell. With Nate’s help, Sephtimus must now attempt to confess his feelings to the girl of his dreams so he can go back to being devoid of human sentiment.

Nate is reincarnated as a banshee reaper and hatches an escape plan to the surface world. But he finds that things in the underworld are not what they seem and Sephtimus’ problems run deeper, somehow even linked to Nate’s own mysterious past.

“Soul City” offers a fresh view of a taboo. It shows a human side to Death and proves that love defies time. It’s both a love story and a fantasy, with elements of human drama. It combines all the ingredients of an enduring story: noble love, loyal friendship, and hope against all logic. Get a copy: Amazon (ebook) / Read reviews: Goodreads

I love the details to a degree where I think I felt the same as the characters. The writing was so graphic that I could easily imagine how things were and what it felt like to be there. I appreciate the homage to Dante’s Inferno and having a background on Greek mythology made it all the more relatable.

Mon D Rea made it so that the heroines are strong figures that are not just pretty faces.

It seemed saturated with characters and I would have appreciated the crows if there were details regarding how they were a force to be reckoned with. I like the reapers but they did not strike me as scary as Sephtimus.

The reveal at the end felt too brief that I wanted more but the story was already ending. The ending of the fight felt insufficient compared to how it began.

(Spoiler alert! Highlight succeeding text to read.) It would have been better if there was an explanation for the sudden takeover by Spinstra and Kharon.

Soul City is a love story in the most unlikely place. The book has a nice pace and you can actually finish it in one or two sittings. It’s a good read if you’re curious about the supernatural. ☁