Like many others, I’m fascinated by space travel. I imagine what it would be like to not be in this planet at least once a day (I’m sure you too). So bless all these astronaut and cosmonauts writing about their experiences—I get to vicariously fly through the atmosphere and live in zero gravity! 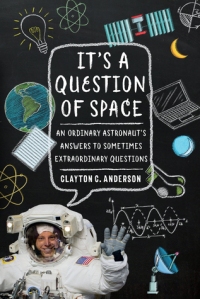 Having spent over 150 days on his first tour of the International Space Station, it’s safe to say that Clayton C. Anderson knows a thing or two about space travel. Now retired and affectionately known as “Astro Clay” by his many admirers on social media and the Internet, Anderson has fielded thousands of questions over the years about spaceflight, living in space, and what it’s like to be an astronaut. Written with honesty and razor-sharp wit, It’s a Question of Space gathers Anderson’s often humorous answers to these questions and more in a book that will beguile young adults and space buffs alike.

Covering topics as intriguing as walking in space, what astronauts are supposed to do when they see UFOs, and what role astronauts play in espionage, Anderson’s book is written in an accessible question-and-answer format that covers nearly all aspects of life in space imaginable. From living in zero gravity to going to the bathroom up there, It’s a Question of Space leaves no stone unturned in this witty firsthand account of life as an astronaut. Read reviews: Goodreads

Following a Q&A format, retired astronaut Clayton C. Anderson (or Astro Clay) gives readers more than just a glimpse of what it’s like to live and work inside the International Space Station with this book. He responds to each question with as many details he can provide, and with such humility and openness that left me in awe. I mean, he’s kind of like a superhero, isn’t he?! (Well, reading between the lines, I think he secretly wants to be Superman.) He covers almost everything—from training to coming back to Earth, from how he slept and showered in the ISS to what he felt about the Challenger and the Columbia disasters.

More, I loved how his passion for what he does (or used to do) resonate in his every answer, and I also enjoyed how he is not afraid to let people know that he doesn’t know something. (There are parts in which he straight up replied along the lines of ‘I wish I could tell you but I don’t know!’) Here are some of my favorite parts, that had me giggling, pondering and yep, searching on Google for more!

My life’s priorities are not negotiable, and my family is right there at the top.

On applying as an astronaut

If there’s a key to success in these nerve-racking interviews, I would say you just have to be yourself. Don’t put on airs and try to be someone you’re not. (Reminds me of the story of the astronaut candidate who refused to sit down for his interview even after being told multiple times it was okay. He didn’t fare too well.) NASA wants to see if you are genuine; whether you have “platform skills,” or the ability to communicate effectively; and how you respond under pressure. Do you have a sense of humor? Can you clearly and efficiently present your ideas? Can you keep them from falling asleep? Those are the sort of things they are looking for.

On the Moon landings as a hoax

Hmmm, I guess a bunch of folks think that all of the Moon landings were hoaxes. Maybe they are also part of the group that thinks Earth is flat.

And let’s face it: if there’s an alien species out there capable of traveling through space and covering distances of light years to Earth, then they’re probably intelligent enough to contact us any time they want.

On sleeping in zero gravity

I love to sleep. If there were an Olympic medal for sleeping, I’d be right there, fighting for the gold.

On the veracity of his answers

I, Clayton C. Anderson, answer questions posted on social media platforms such as Quora and anywhere else on my own. I do not have a media management team—I can’t afford one—unlike some of my colleagues. I love trying to inform folks who ask questions via social media platforms, but I provide answers that are anecdotal in nature. I choose to not provide a bunch of highly technical information. You can google that stuff!

(^ But of course, we can all train for it, apply and hope for the best! As Astro Clay says, keep looking up!)

The book could be more structured or organized, like having sections specific to topics, to make it easier for the reader to follow the life of an astronaut in space.

It’s A Question of Space by Clayton C. Anderson has science, humor and soul, and above all, it’s super easy to read. For those who are into space travel or the astronaut life, picking up a copy shouldn’t even be a question. *wink* Now onto adding his first book, The Ordinary Spaceman, to my TBR pile!

The reviewer received a copy from Net Galley. Excerpts and quotes may not reflect final version. It’s A Question of Space comes out July 1.