It’s hard to miss Mina V. Esguerra, especially if you’re looking at Filipino romance authors in English. With over 30 published novels and her fantastic work with #romanceclass, she has been helping make major breakthroughs in revolutionizing how the romance genre is recognized and appreciated among Filipino readers, and putting Filipino writers in the radar of international readers. Here, she talks about experiences in eight years worth of independent publishing, championing fellow authors’ works and building safe spaces for romance writers and supporters.

Mina V. Esguerra writes contemporary romance, young adult and new adult novellas. When not writing romance, she is president of communications firm Bronze Age Media, a development communication consultant, and a publisher. She created the workshop series “Author at Once” for writers and publishers, and #romanceclass for aspiring romance writers. Her young adult/fantasy trilogy Interim Goddess of Love is a college love story featuring gods from Philippine mythology. Her contemporary romance novellas won the Filipino Readers’ Choice awards for Chick Lit in 2012 (Fairy Tale Fail) and 2013 (That Kind of Guy). She has a bachelor’s degree in Communication and a master’s degree in Development Communication. Her recent release What Kind of Day, the first book in her new series called Six 32 Central, is available here. 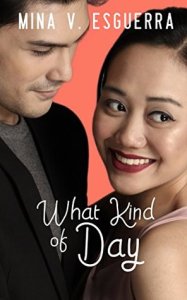 Hi, Mina! Great to have you back here. The last time we talked, it was about What Kind of Day (available here), your latest release and the first book of your new series Six 32 Central, which remains, of course, indie-published. Now, you’ve been doing this since 2010. What would you say is one thing or lesson about writing that has always stayed with you—something that has never changed throughout the years in spite of everything, something that you would always tell a fellow author as a piece of lifelong advice?

So I’ve experimented a lot, and tried different partnerships, and tried writing different things. When people ask me what works, I tend to tell them what’s working for me at that time, and that may change. After all this time though, what has not changed is that I need to believe in what I’m writing. This isn’t to be confused with liking it, or loving it, or that it seems easy while I’m doing it, or it paid off financially somehow. I’ve done a lot of writing, some of it made more money than others, some of it easier or harder to do, but it’s always time well-spent if I believed in what the book or story was about. When writing becomes difficult, I try to remind myself of this.

Your faith in your writing does shine through, if the book reviews and fans’ support are anything to go by. Speaking of shining, your #romanceclass work continues to be exciting and inspiring. In an interview with Bibliophile Soprano in 2014, you said that:

“More people should read indie/self-published books by Filipino authors, because a lot of them are awesome, and they will be the future of publishing.”

The future is here… how do you think the readership and recognition for self-published Filipino authors, particularly romance writers, is faring now? What have been the growing pains, and is there any room for improvement?

There’s progress! It still feels like a climb, but maybe always will be. What’s changed, I think, is that on a daily basis now, what matters isn’t if a “big publisher” will notice an author, but who is best to work with so the story gets the care it deserves, and the readers get the books they want and need.

#romanceclass authors and live readers at #AprilFeelsDay in 2016 / via

Organizing events and engaging with readers online has been helping with what has always been a discovery and accessibility problem. Real obstacles that remain? Colonial mentality, which prevents talented authors with relevant stories from being discovered by readers. And all the internalized prejudice that leads to one believing that romance can’t be quality literature, because this mindset from the very beginning excludes romance authors (who are more likely to be women) from opportunities, prizes, fellowships, awards. Frankly, I’m not sure if it’s worth it to keep knocking at the door of a house that will never let you in—because let’s say even if they do, everything in that house was not built for you, and none of it will be yours to use. It’ll probably feel icky being in there, anyway. At the same time, 2018 has been a great year and we have data to show that our books are being read, enjoyed and recommended—now more than ever.

Where we’re at now, if one wants to help, maybe help strengthen the alternative and friendlier spaces that we’ve created on our terms, instead of forcing us into inhospitable environments. Buy and read the books where they are. Be the person who discovers and champions these books and authors, at least one, ideally more. When someone asks you for recommendations, be ready with three or more. When asked if you’ve read any this year, be able to say yes, you have. Especially if you plan to be a creator as well.

Readers do play a significant role in this process, and you did mention so in a Rappler interview in 2012:

“It’s [successful self-publishing] a combination of writing a good book, writing a book in the right genre and actively engaging readers and other writers.”

Highlighting reader interaction and relating it to what you said in your interview with Chachic’s Book Nook in the same year,

“Before, I was just hiding, just looking at them without commenting back or replying. After a while, I realized I should say something as it has been so nice of them to have bought the book, read it and shared it with their friends. And I should acknowledge it somehow so I started all the social media accounts in case they want to reach out to me and I can actually reply.”

… what have been the plus points and pitfalls for you when it comes to reader engagement? Any experiences in which you’ve learned something majorly altering?

Without going into specific detail, it’s bad when a male reader acts inappropriately online or in person, because of what they think they’re entitled to because they read your romance book.[This] definitely helped define how I interact with readers, and if that happened again, I would point out how inappropriate it was and sooner.

The good side of it is when the reader wants to participate more, and that’s how the community we now have was formed. Now we have a pool of readers who are editors, are authors, are champions of books, and remain readers still. I mean, no matter what, we should remain readers of the books. I’ve revised my thinking on this slightly by the way, because it’s exhausting to always keep interacting. Engage and participate based on what you’re willing and able to manage. It should be totally okay to just be a reader of the books, and for an author to not have to “perform” all the time.

Well put. Moving onto the side of creating, you said in your Bibliophile Soprano interview in 2014 that:

“The things I’m most proud of in my own books are usually inspired by other genres or entirely unrelated work.”

Can you share your favorite plot bunnies that led you to your books? 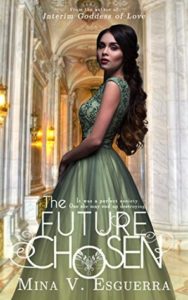 Sometimes, I’m really proud of what I did with The Future Chosen because that was inspired by nonstop debates leading up to an election, and I can’t believe I actually wrote all those words based on that plot bunny. Better at Weddings Than You came from being at a Starbucks with Salve Villarosa and Miguel Almendras (#romanceclass live readers) and overhearing her tell him, “You should be a wedding planner.” That grabbed me and thankfully did not let me go until I completed the thing. (Related: “FaceBookIt: Makeup Inspired by ‘Better At Weddings Than You’ by Mina V. Esguerra”)

In 2015, you wrote “4 Great Things About Being A Filipino Romance Author (Right Now)” for us here on Bookbed. Do these four things still ring true? Are there any lessons or insights you want to add?

Yes, they’re still true! But with a revision note for #2—publishing is easy, but it takes work to do it responsibly, being mindful of the impact it’ll have on readers. Now I emphasize working with those who know the genre, and read the books, and know the issues brought up about similar books… a lot of these things are learned by being part of the community of readers. If you create separate from them, then this might seem difficult and limiting because then you have no awareness of the effect the books actually have on readers. But we don’t want to create books that will have no impact whatsoever, do we? So might as well do the work. ☁️