She makes art, she writes stories, she puts them together, she self-publishes her first book. Meet 21-year-old Jay Pillerva, or better known as @jaaychaan online, and learn about how she began creating and how she made her first illustrated novel Quinn and the Metropolis happen.

Jay Pillerva is an independent illustrator, novelist and animator from the Philippines who has been writing and drawing her whole life. She aspires to contribute professionally to the creative industry with her stories and illustrations. The Metropolis Series has been her passion project for years. It is a loose account of her teenage years and her overall struggles as a writer.

Follow her on Instagram and Twitter / Visit her art blog and portfolio here / Buy her book: Amazon, Materica / Read the first five chapters for free: Tablo

Hi, Jay! It’s exciting to have you here on Bookbed—we’re always looking for young Filipino indie creators willing to share their story. The beginnings first: How did you discover you wanted to create?

Both my parents are artists so I got into art at [an] early age. My mom says I was two when I began drawing extra characters on my children’s books and doodling on small pieces of paper. I think she still has them; they’re most probably kept in folders in her room.

My interest in writing came shortly after—probably because of all the children’s books I had. My earliest memory is from when I was five years old. I wrote a book about animals using an entire sketchpad. I even designed the cover with markers and art paper. I continued to write short stories until I finally wrote a novel at nine years old. (I was a busy child, apparently.) It was about fairies and other mythical creatures, and of course, I designed the characters myself.

As for training, it’s a little bit of both. I’m a graduate of Multimedia Arts which involves both writing and drawing (and a lot of other things). But before college, I was active on an art-sharing website called DeviantArt. There, I frequently posted fan art of the cartoons I watched, and my art style slowly developed.

Animation was a big inspiration altogether. I enjoy both western cartoons and anime, so in my teenage years, I often switched between the two art styles and experimented often with coloring techniques.

Later on, I realized my art has become a mixture of both styles—even my writing style, as some have observed. I think I have subconsciously taken narrative elements from all sorts of animated media while writing, and my profession as an animator must have rubbed into my novel, as well. Nevertheless, I’m glad people see movement in my work, even if they’re just still images or text. 🙂

I definitely saw it in your impressive debut graphic novel, Quinn and the Metropolis (read our review here)! Congratulations, by the way. Can you tell us  what finally got you to where you are with this book right now? What made you decide to publish, and who helped you? Any favorite victories or growing pains you want to share from having done so? 🙂 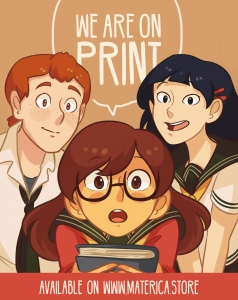 Thank you very much! Actually, the publishing process was pretty easy and pleasant. I sell paperbacks through the Materica Store who accept works from independent authors for publishing, and their customer service is excellent. Indie authors should check them out!

I first published my book digitally last January through Draft2Digital. I used my social media handle, jaaychaan, as my pen name, but I received an email shortly after stating that I had to provide a last name.

I was a little wary at first, but then I decided to continue with the publishing process because it is one of my childhood dreams. Sometimes, I wish I could go back in time (just like Quinn, the protagonist of my book) to tell my younger self that I made her dream come true.

It was actually the writing process that was my favorite part. I was 19 when I was working on what became the final manuscript of my book. It was in my third year of college and things were getting hectic, so it was nice to escape into my own fictional world and see things through Quinn’s eyes every once in a while. I typed most of my first draft on my phone so writing was easy to squeeze between making projects for school. My phone is an iPhone 4s and you can spot the device in some of my drawings of Quinn.

Once you have writing out of the way, self-publishing becomes very demanding. My mom now helps me with proofreading so I can focus a little bit more on my work, but then there’s the cover and the overall design of the book to worry about. I had a lot of fun working on those, nonetheless, but real kicker happens after you publish your book.

I invest as much time as I can in promotions because that’s what builds an audience for my book. I find time to make colored illustrations of my characters to introduce them to my followers on social media while selling/giving away stickers. [By the way], adding illustrations were my parents’ idea. Initially, I didn’t want to because it would take a lot of time, but I changed my mind thinking it would add an extra appeal, especially as a new author.

When talking about my book, however, I’m often tongue-tied when people ask if they could get my book in a store. I have to explain that my book is only available through online platforms and can even be read for free on my Tablo account, but I am glad some people have opened their doors to independent authors like me. I know some people who have read and purchased my book, and even received reviews from some of them. I still have self-doubts about writing, even as a self-published author. I’m currently polishing Quinn’s sequel and planning the illustrations for it. The process is time-consuming. I’m constantly trying to juggle between being a functional young adult with a job and aspirations while still being able to work on this little passion project of mine.

As for any growing victories I’ve had, I’m glad to have met people online who are interested in my work, including Bookbed!

Glad to have found you, too! You do religiously post about your work online. We all know the pros and cons of doing so, but mind sharing how exactly it has been helpful (or not) for you as a creator?

I think the greatest advantage of posting art and writing online is getting to meet all sorts of people. You can learn from them as much as they can learn from you. In fact, the beta reader for my books is an online friend. He’s a writer from Australia and I don’t know what direction my series would have taken without his suggestions. I’m glad that many of the people I’ve stumbled upon online often provide helpful feedback. They helped me grow into the artist I am today, so I try my best to comment on other people’s works as well to encourage them to keep creating.

Curtis and Philip from Quinn and the Metropolis

Curtis and Philip one year later

However, online platforms increased my tendency to compare myself with “better” artists. I often struggled with this as a teenager, and it still bothers me a bit to this day. For a while, I judged my worth based on likes and followers and would push myself to make art even if it was affecting my health. Now, I tend to get slight neck pains and migraines and I’m only 21! I hope young creatives realize that it’s okay to take breaks whenever they can. Everyone grows at their own pace and it isn’t healthy to compare yourself to others.

Try taking long hot showers for the migraine, and well, just take it easy—trust me, your people will eventually make their way to you 🙂 So, with all that, how do you keep yourself motivated?

About a month ago, I posted a tweet that says, “Why do I keep writing?” To be honest, I’m not that famous and don’t earn much from my book. As a fresh college graduate, I began to feel that the time I had to reach success was limited, as if being in your twenties automatically sets your life on track.

The tweet was an inner-dialogue. I then said to myself, “You like writing, don’t you? Then keep doing it.”

I feel that society has so many unnecessary standards that categorize a person successful, and it makes me forget that I can choose the direction of my life. I chose a job that would give me enough spare time to continue writing. Happiness should also be a key to success.

That’s the way to go, making your own definition of success. I’m personally glad you’re where you are right now; we definitely need more of the younger Filipino creators to explore their potentials and put themselves out into the world. Speaking of which, what do you think does it mean to be a young Filipino creator today?

This is an interesting question for me, especially since a lot of the inspirations for Quinn and the Metropolis were foreign media. There are some parts in my novel that hint toward this because I wanted to touch on the effects of colonialism and colonial mentality. I was always intrigued by it that sometimes I like to think about how it still affects me and our society today.

For example, it was only toward near the end of my book that I revealed Quinn was Filipino. At the same time, she hears someone speak Filipino [sic] and tells the audience that English is her first language. This was a conscious choice as I wanted to talk about my personal experience. Growing up, I was an Inglesera. I eventually improved my Filipino [sic] in my late teens (at least in my personal opinion, haha), but I have to admit that English remains my niche because of the things I watch and read.

I think that being a young Filipino creator today allows me to discover, read and support local art and literature because we all understand the highs and lows of the creative process.

And with that, we should stick together indeed! Now, are there any Filipino creators and works you look up to and love that you want to give a special shoutout to?

Online, I looked up to a few popular Filipino illustrators such as Mike Inel and Punziella. As for writing, I remember reading an article about Marcelo Santos III’s writing journey and being inspired by it, though I don’t remember much of what the article says and admittedly, I’ve yet to read one of his works. XD

There are two Filipino creators I occasionally interact with online. Moras Dela Paz (@morasdelapaz) is one of the first people I followed on Tablo. She writes chic lit and romance. The other is Carossmo (@carossmo), a web comic artist working on a slice of life series. I like how they represent Filipino culture and having it blend with the narrative. ☁️