I spent most of my teenage years back in my hometown in Dipolog City in Zamboanga. There, I met different people who spoke different languages, of which Chavacano is one. Although I can only speak a few Chavacano words, this language speaks to me a volume of the people’s culture and identity. So when I came across of a news about the newly-released Chavacano-translated version of The Little Prince, a 1943 novella by Antoine de Saint-Exupery, I was curious of the man behind this endeavor. 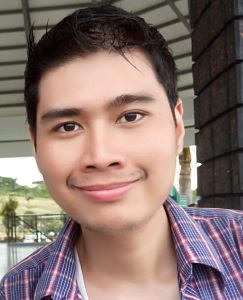 Jerome Herrera is a Chavacano enthusiast from Zamboanga City, Philippines. He translated the classic novella The Little Prince into Chavacano and self-published it. He also founded the blog Bien Chavacano, which chronicles his journey of discovering the language of his hometown. 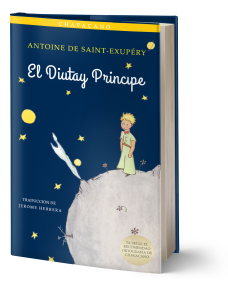 Believe it or not, I came across The Little Prince only in 2013, at a very timely point in my life wherein I was beginning to be too concerned about “matters of great consequences.” The book helped me see life in a very different manner than what I was used to. I hope the [translated version], El Diutay Principe, will touch people who will read it in their mother tongue as it did me.

Yes, I would say it is much more relevant today than when it first came out. We live in a world obsessed with “instant,” and humanity has lost the art of making friends. This is why with all the technology around us that is supposed to make us feel connected, many people find themselves lonely.

Why did you choose to translate it into Chavacano? How long did it take you to finish translating the book?

I created this translation because I love the Chavacano language and I have a lot of respect for it. I did not translate just so that I can say that I did or to make my resume or my credentials look nicer. The idea to make the translation was presented to me in 2013, but I only began translating in earnest during the last quarter of 2017. This work is a true labor of love. It is priceless. Not even all the stars in the sky can compensate the amount of time and effort that has been placed in making this book a reality.

What were the challenges you faced in translating The Little Prince? 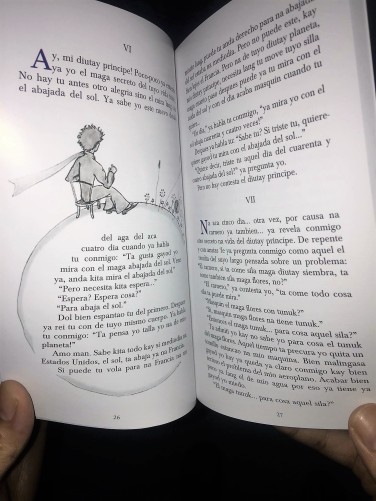 The number one challenge was definitely spelling. While the city government of Zamboanga came out with a recommendation that all Chavacano words should be spelled etymologically, they did not establish specific rules and limitations that surround that general rule. It wasn’t clear how etymologically pure or how close to the original language they wanted the spelling system to be. Thus, I decided to create a unique spelling system surrounding the general orthographic rule prescribed by the local government.

Another challenge was words which we don’t say directly or which don’t have a direct translation in Chavacano. An example is the word “digest.” I had to think of an indirect way of saying that word. Of course, the fallback is always to use the Spanish equivalent but I decided to keep this at a minimum, mostly in areas where the text is poetic or figurative. I wanted the Chavacano in the book to be a true representation of the language in this day and age and not an idealized version of it.

What were the biggest challenges you encountered in self-publishing the book?

If you decide to self-publish, you’ll have to do everything by yourself. After I finished the translation, I realized it was just half of the task. There was still the book layout, book cover, as well as editing and proofreading to be done. Since these things cost a lot of money, I decided to find out if I could do these things myself.

Fortunately, I have a lot of free time which I devoted to studying how to design book covers and book layouts. My friends and family helped me proofread and edit the book. I also had a tough time negotiating with printing presses because I didn’t know what book paper 70 meant and other technical terms like C2S. So I had to do lots and lots of research before I was able to get printing presses to take me seriously.

What does El Diutay Principe aim to accomplish?

The project began as my past time. The idea to publish the translation only came later when I felt that doing so could do a lot of good for the Chavacano language. It is my fervent hope that El Diutay Principe would become the preeminent piece of Chavacano literature, and that it would greatly aid in Chavacano becoming a standardized written language in the future. I also hope this book will create awareness about the Chavacano language in the Philippines and around the world to legitimize as well as elevate its prestige. Inshallah, it will be the start of a long list of books published in Chavacano. ☁️

Hello! Welcome to Bookbed ☁️ We talk about books, support creators, and advocate for a #ReadingNation 🇵🇭 View more posts

4 thoughts on “For His Love of Mother Tongue: Jerome Herrera on Translating ‘The Little Prince’ into Chavacano”